The music was recorded in the early 80’s, and the very end of the disco era, so it sounds like early pop/new wave. This is a direction many popular disco bands went with their music style when disco became unpopular. Unfortunately, this band has nothing to do with coffee (the drink).  Songs on this CD include: My Turn to Burn, Slip and Dip, Take me Back, A Promise, and more. You can hear samples of this music below.

Buy it on Amazon 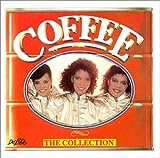